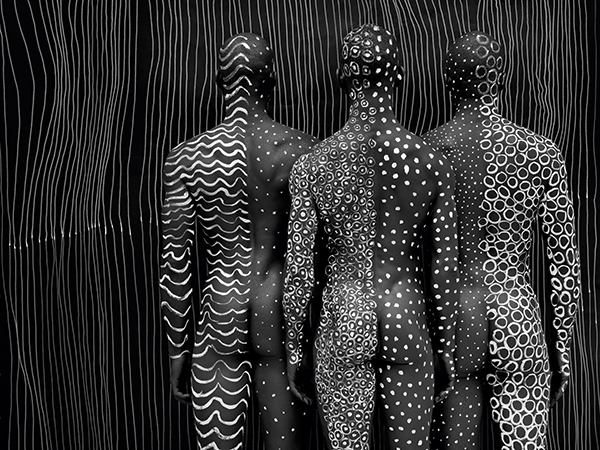 When starting the research for Cabasa’s body painting project it wasn’t long till I came across the images of Art Wolfe’s Human Canvas project. The images are so beautiful and striking and unlike the work of other body paint artists they seem much more intertwined with the world of tribal art and the ancient traditions of body painting and modification in which i’ve been researching. It is clear in these images that Art Wolfe has spent time with the tribes in the Omo valley – The Mursi and surma tribes – it is a very clear reference of they’re body painting tradition, they use natural resources from the river and earth around them, ochre, mineral rocks, chalk and clay as paint and sticks, seed pods and other natural objects as brushes. Using these materials they create beautiful repeat patterns – of lines and shapes not dissimilar to the designs displayed in this project.

I think this project is a collaboration between cultures – but because art wolfe had travelled to these tribal communities in Ethiopia and Papua New guinea before he already had a relationship with these remote tribes, I think this is why this project works and has a beautiful integrity. Obviously the images are striking and the way the photographer has composed them is stunning – layering bodies next to each other – reflecting the surface patterns with the placement of the bodies. and having backgrounds which compliment and confuse the image into one continuous pattern – without end.

Pictured above are the Chimbu Skeleton tribe of papua new guinea, who paint themselves with clay and charcoal to look like the living dead. Most of this series for the Human canvas project were taken in black and white and only black and white paint was used to paint the body – I think that as a series of images it links them all and they are a beautiful exhibition of photographs. I do feel as though the contrast is beautiful and thought-provoking and this quote which I found in my research comes to mind.

‘Part of the profound beauty of a painted face is that you can’t see the color of the skin beneath. All you see are the eyes — the very human eyes. My explorations into the earliest human art and cultures convince me that we all truly are one people, sharing a universal view of life and our core aspirations, originating in a single fundamental culture — which anthropologists today tell us began with a small group of modern humans in Africa and subsequently spread around the world and diversified. By using cultural images, I believe we remind our public audiences of the unity of the family of humanity.’ Through my research i’m constantly reminded of human existence and how the western world has attempted to infect every corner of this beautiful world we live in and not always had a positive impact. With one act we celebrate the cultural diversity of every human and animal living on this planet and with another we stamp out anything we don’t understand or can’t use for monetary gain. with the human race’s technological advancements we are ever to often reminded of the cost and effect on the planet. Images of deforestation, animals stranded in trees in the middle of destruction due to our need to consume, with this need to keep advancing and destroying not only have we lost areas of untouched beautiful nature but we have lost many tribal communities and indigenous people – it’s what Americas built on. Even in Papua new guniea one of the most remote places, completely un-discovered by the western world till the 1930’s, religious traditions have been near enough eradicated by christianity.